We are a full-service relocation magagement company, serving your national and international needs.

According to United Van Lines’ 39th Annual Study, Oregon claimed the No. 1 spot as “Top Moving Destination” for the third year in a row

Each year, United Van Lines studies migration trends across the U.S. as part of its National Mover’s Study, and at King Companies we look forward to the annual study as it provides us with a snapshot of what changes from year to year in terms of the top inbound and outbound moving destinations.

This year, United Van Lines’ 39th Annual National Movers Study uncovered many interesting data points, and here are some of the highlights:

This map created by United Van Lines offers a great visual overview of the top inbound and outbound states for 2015: 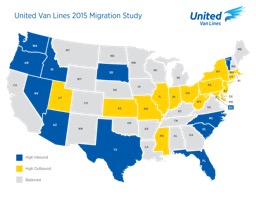 There are many factors that affect migration patterns across the U.S. – these can include business incentives that prompt employers to relocate their operations to reduce taxes or broaden the talent pool. Often, people will relocate to achieve a lower cost of living; take advantage of amenities such as arts and cultural opportunities, the club and restaurant scene, family-friendly events and activities, public transit, and cleaner living or, to retire.

If you relocated across the country or to a different state in 2015, we invite you to join the conversation by commenting on why you chose the location you moved to last year. Or, if you are planning to move in the coming year, what factors are you considering in choosing your new city of residence?

United Van Lines has been tracking migration patterns on a state-by-state basis, since 1977. In 2015, the study looked at household moves handled by United Van Lines and its agents within the 48 contiguous states and Washington, D.C.

As an agent of United Van Lines, King Companies has the resources and expertise to be your “go-to” resource for all relocation needs. Whether you are relocating your household, moving an office, or are in need of logistics services, we strive to ensure that your next move will be the best you will ever make. Call us today at 800-854-3679 to learn more.

We hope that you will consider King Companies for your future relocation needs. To learn more about our services, visit is at www.unigrouplogistics.com. And, don’t forget to connect with us on Twitter, Facebook and Google+ for our latest news and updates!

Tip Of The Week

When moving your kitchen supplies always make sure to double wrap and when packing into a box place the items vertical.